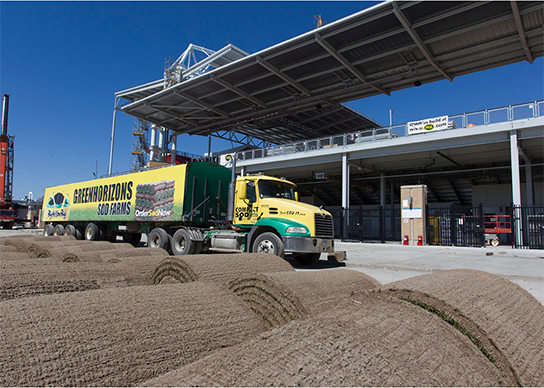 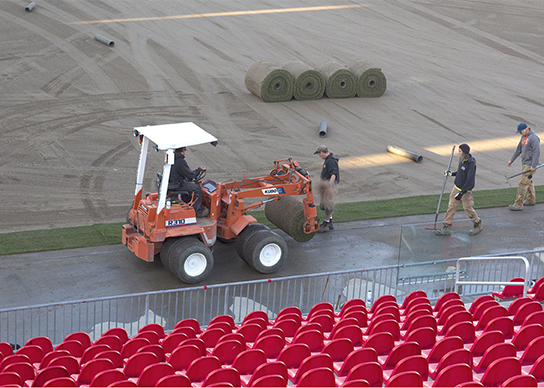 We have a large arsenal of specialty turf handling machinery that allows us to complete projects in unprecedented time frames. 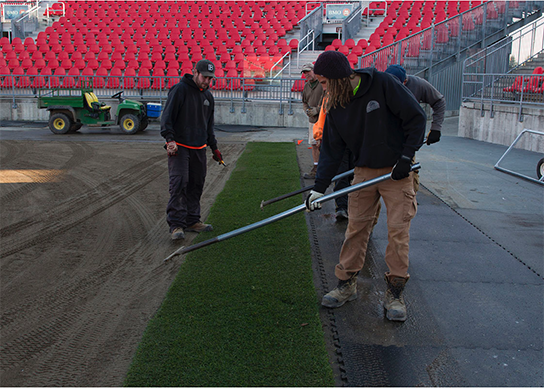 We take extra care to ensure that our first strip of sod is laid perfectly straight, so that as we build the field, everything lines up. 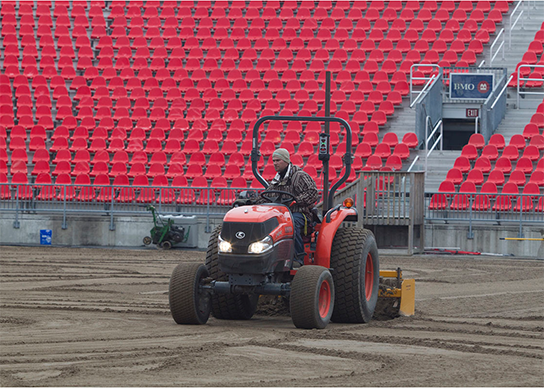 The entire field was built on Engineered Sand, one of the best growing mediums for our Ultimate Sports Turf.

BMO Field is an outside pitch at Exhibition Place in Toronto. Originally having artificial turf, our team reconstructed it to natural grass.

When the Toronto Football Club arrived in Toronto, ON, it was apparent the artificial field that was in place at BMO needed to be changed to a natural turf field to meet the demands of world class football players. One year after the renovation to a natural field was completed, Greenhorizons was brought in and consulted to help solve a drainage problem that was occurring. The original natural turf installation was done with native sod which is what is on most people’s lawns. Native sod does not drain as well as other options so Greenhorizons suggested its GHG Ultimate Sports Turf System grown on engineered sand which would drain rain water much quicker. The decision to custom grow a sod on engineered sand profile was decided. Greenhorizons removed the thick cut native soil sod that was there, laser graded & top dressed the field up to original grade and installed a GHG Ultimate Turf Sod™ grown on, and top-dressed with engineered sand.

Tight time constants due to having to wait until the Football season ended would mean the potential of running into early winter weather which could derail the installation & establishment process of the sod.

Early summer the following year, the Women’s Soccer Teams from Canada and the USA, were scheduled to play a friendly game billed as “The Rematch,” at BMO Field. Prior to the game a heavy rainstorm hit. Ten minutes after the rain stopped the referee cleared the field for play. The field was able to drain itself in a quick and efficient manner whereas if the field stayed on native soil that heavy rainfall would have sat on top unless removed physically.